Experienced sound engineers seem to speak a secret language. Random phrases and letters of the type “attack” and “release” are used to describe inanimate objects and functions. They talk about “gluing” and “compressing” instruments that sound quite acceptable even without them.

Most of the compressors we use today are based on analog hardware devices (* most, but not all. There are many modern plug-ins with unique patented algorithms. They can be seen in FabFilter, Klanghelm, KushAudio, TokyoDawnRecords and other popular projects).

1176 is arguably the most famous compressor in the world. Released in 1967, it was the first “peak limiter” to use solid-state technology instead of pipes. The device uses a field effect transistor (FET) to apply compression, which gives it excellent brightness, presence and energy.

1176 underwent several revisions. RevA was the original silver model with a blue stripe. RevC was released in 1970, and featured a black panel and increased noise reduction. Some engineers believe that this model has a slower release and increased low-frequency content.

The compressor performs well on various instruments. In particular, these are drums, bass guitars and vocals. The number of its emulations exceeds all competitors.

1176 and LA-2A are opposite as Yin and Yang. The first is aggressive, cruel and pedantic. The second is smooth, soft and creamy.

LA-2A is a leveling amplifier and optical tube compressor. He has only two control knobs that control the signal level and the strength of its compression. That is why it is so popular. It has a fixed attack time of 10 milliseconds and a ratio of 4: 1 in compression mode or 10: 1 when limiting.

The first models were manufactured by Teletronix in the early 60s. In 1969, they released the LA-3A, a solid-state version of the LA-2A. For the most part, 3A was a good substitute, although it has a faster attack time with large transients.

Versions of these devices were modeled by McDSP, PSP-Audio, UniversalAudio and Waves. 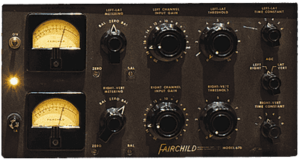 Fairchild are the heaviest, oldest and most expensive analog compressors on the market. Produced in the late 50s, these tubular compressors were available in two versions: mono version 660 and stereo version 670.

Compressors use compression methods of the variable mu, which means that the dynamics ratio changes in response to the level of the signal sent. The result is a unique compression knee shape that responds differently (depending on the type of signal).

Fairchild may look intimidating, but the controls are essentially the same as on any other compressor. There is no threshold control, so adjust the effect yourself and by ear. The gain reduction starts between 1: 1 and 2: 1 for smaller peaks and gradually increases to 20: 1 on loud input signals.

In 1991, Manley Labs released their version of the variable mu compressor. Vari-Mu is designed to compete with the legendary Fairchild, and is known for its remarkable shine and silk, and is often described with a warm, dense and thick sound.

Controls include input and output amplification, as well as a Left / Right – Mid / Side switch. Vari-Mu is also equipped with a compressor / limiter switch. In compression mode, the device uses a soft knee with a ratio of 1.5: 1. In limiter mode, a hard knee is set with a ratio of 4: 1.

The controls are simple: entry, attack time, release and exit. There is also a threshold ratio button that switches it between eight unique curves. Each has its own personality and release form.

Tube, Optical, FET or VCA – Distressor can do all this.

Computer for a recording studio

Free music distribution: the 7 best services for Spotify in 2019