Shit-control sound in the studio 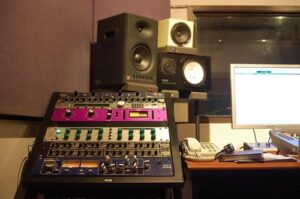 Shit–control – this is the control of the mixed / mastered material on the monitors, which give an even balanced sound (not necessarily high-quality). Often, these monitors are used in addition to the main monitors that mix music. It can also be attributed to the concept of “shit control” sound control in the reference headphones. It often happens that the sound (and its panning) sounds differently in the controllers, so do not miss this moment.

Popular monitors suitable for this task include the legendary Yamaha NS-10, Auratone 5C Super Sound Cube, Avantone Mixcubes, Behringer Behritone C50A and many others. Prices for a pair of monitors for the sheath-control start from $ 250.

As it turned out, there is little information on this issue, but despite this, such control of the sound must be in each studio. If your mixed mix sounds good in these monitors, it will also sound balanced on other sound systems. If you do not have the opportunity to purchase them, have a look at the vst plugin from the company Audified under the name MixChecker. There is no way to make high-quality song mixing? order it in AREFYEV Studio!

5 bad habits that spoil the quality of voice recording in the studio
Kanye West releases Donda Stem Player for remixing
What is sound normalization and how to apply it?