Mac vs PC: which is better for making music? 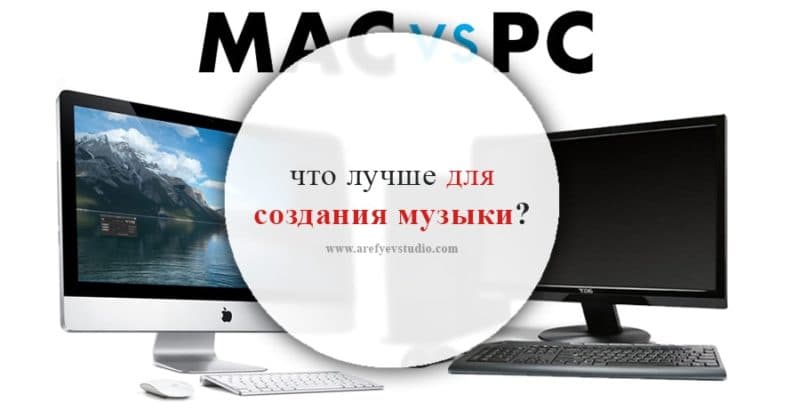 The heart of the studio is a computer, a sacred place where we store our music programs and plugins. Many composers and engineers are wondering: which is better to choose.

“Mac or PC? What is better for making music? ”

Our answer is always the same: “buy a good powerful system!”. Will it be Apple or PC – it does not matter, the main thing is that it works stably! This question is somewhat similar to the question “which DAW program for writing music is better?” Each program is good in its own way! It is important to consider how much time it will take to study and put knowledge into practice.

Apple is known to have dominated music studios in the 90s. In the 2000s, everything changed and Windows computers began to “lick up” Apple. Perhaps this happened because the PC is more affordable and in our time are equivalent in quality. Today it’s hard to say who is more popular. A good, professional studio should have both systems. It often happens that you need to work on various projects that were built in specific DAW music programs. Most audio and video formats (WAV, AIF, MP3, MOV, AVI, MP4 and so on) work fine on all systems.

Both platforms have software that only runs on a specific system. On the PC go: Sonar, Sound Forge, FL Studio, Adobe Audition (and others). On the Mac go: Logic, GarageBand, Peak, Soundtrack Pro.

But there is still a detail …

Both platforms can work with Ableton, Cubase, Nuendo, Pro Tools, Reaper, Bitwig Studio, Digital Performer and some others. Fortunately, most (but not all) software synthesizers, effects, plug-ins, and samplers work on both platforms.

To write VST music with synthesizers and plugins, you need a good processor and at least 4gb of RAM. There is one more consideration that you need to consider if you are making sound recordings: computers produce some noise that will be captured by the microphone (if you do not have a specialized room / room for recording). Desktop MAC computers are very quiet. PCs are louder, but noise can be reduced by replacing some parts of the computer.

Okay, you’ve already prepared for the new system, but what’s next? In many respects, further actions depend on which program for work you will use. Will the computer work on the basis of a professional studio or at home? Fortunately, there are music stores that sell (or assemble custom-made) computers specifically for musicians.

Perhaps you’ll think: “Why go to the music store at the computer?”

But what if you write music on the go? There are only a few specialized laptops on the Windows system for working with sound. In this case, it is better to choose Apple Mac Prok.

Apple has a creative beginning, especially in the music industry. Their products are known for their stability, simplicity and performance. Today you have a wide selection of models from the Mac. MacBook Pro will be more than enough for a home studio. There is also a wide range of specialized audio interfaces with plugins and software such as Logic Pro, making Apple computers a serious candidate for your music studio.

Apple is perceived as an expensive device compared to a PC. It is true that they do not offer cheap models, especially with the appreciation of foreign currency. The company is positioning itself as a premium class. You get safety, comfort, build quality and exclusivity. In the field of music production, Apple has a big flaw. Music, software and plugins need to be bought. There are far fewer free products on this system than on a PC.

As an example, below is the 27-inch iMac with Retina 5K

You can get the LogicPro music program, which is pre-installed for an extra $ 199. If you need more RAM or disk space, you still have to fork out.

For PC, you can get a huge amount of free VST tools and other useful plugins and programs. Windows computers are more flexible and will not create a hole in your budget. For example, you can build a computer to order, and it will consist of various compatible components. If you need additional disk space, you can simply add a new hard drive. The libraries for the Kontakt sampler are large (for example, the Symphony Series library = 44 GB), so sooner or later, there will be a question of increasing the amount of memory for full work.

If you are choosing a computer for your home studio, it is best to take a closer look at the PC on a Windows system. With a small budget, you can get a good build for music and even for games. Below is an example of a computer configuration that can handle any music program, plug-ins, and virtual instruments.

If you need to add a 27-inch monitor, mouse and keyboard, you’ll have to fork out another $ 300, and it will still be cheaper than the Apple iMac

Both platforms have advantages and disadvantages. It all depends on your budget, productivity, digital workstation (DAW) and personal preferences. If you choose a computer for your home studio, which will conduct other activities other than music production, choose a PC. This is a more flexible and inexpensive option. The new Windows 10 system is a stable version compared to the previous ones, so why not?

Do not forget that in addition to computer and music software, you still need good monitors, an audio interface (sound card) and a MIDI controller.