Many of us have either heard or have spoken out ourselves about the degradation of contemporary music. Tracks from the top charts every year become less expressive and more similar to each other, and the Internet is flooded with endless “Cadillacs” and “Fendi Hoodies”. It turned out that this is not a retrograde delusion, but a relatively long time ago confirmed by science.

Scientists from the Research Institute of Artificial Intelligence in Barcelona conducted a large-scale study back in 2012, analyzing the changes in popular Western music from 1955 to 2010. They used the Million Songs database, running nearly 500,000 tracks through statistical algorithms. The main parameters for the study were chosen harmonic complexity, timbre variety and loudness.

Timbre variety is made up of the number of instruments used and the vocal range. Quite simply, it characterizes the “depth” and “richness” of the work. It turned out that over the past decades, the timbre variety in popular music has significantly decreased. 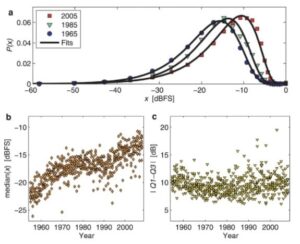 Decreased originality has also been statistically proven. Most of the modern tracks are built on almost the same combination of keys, drum machine and sampler. Of particular interest among scientists was the so-called “cry of the millennial.” Hundreds of artists use the same transition from the fifth degree of the major scale to the third and back to the fifth. Most often this combination is accompanied by the words: “Wow, wow”. 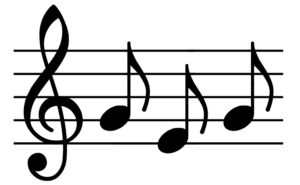 This technique is one of the simplest forms of so-called hooks. These are musical and vocal algorithms that are designed to hook and make you listen to the composition again. Hooks can be roughly categorized as negative and positive.

Positive ones are most often characterized by a noticeable, but not sharp difference from the basic harmony, originality and precisely calibrated repetition timings. Examples of positive hooks are the loss in the song In my time of dying Led Zeppelin or the word Yesterday in the Paul McCartney song of the same name.

Negative hooks are characterized by as many inappropriate repetitions as possible and a primitive structure. Most often they take the form for which the term earworm or brainworm was coined – ear or brain worms. The first time such names were used in Desmond Bagley’s 1978 short story “Free”. A song saturated with such “worms” stays in the head for a long time, becomes familiar in a short time and makes you listen to the composition again and again. The brain is designed in such a way that in most cases it does not like everything new, because much more resources are needed for its perception and assimilation than for the same actions with familiar phenomena.

Over the past decades, the number of negative hooks in popular music has grown exponentially. This is due to changes in access technologies. They used to use analog media, people were more thorough in their listening and the battle for attention between labels was not so acute. People now have instant access to millions of songs, and producers need to grab attention instantly and as efficiently as possible so that the consumer doesn’t flip ahead for as long as possible, but ideally comes back again. This trend in high values ​​has also led to the primitivization and increased similarity of a huge number of popular tracks.

The variety of poetry has likewise declined. The researchers applied the Flash-Kincaid Readability Index to the lyrics of popular songs written from 2005 to 2014. The algorithm shows the complexity of the work for perception and measures the literary skill. Over the selected period, the index value dropped by half a point, the number of repetitions of the same words increased, and the texts themselves became shorter. 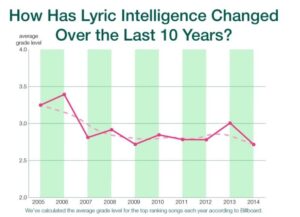 One of the reasons ー the authorship of most of the world’s hits of the last twenty years belongs to two people ー Max Martin and Lukasz Gottwald. They have written for Britney Spears, Taylor Swift, Justin Bieber, Katy Perry and many more.

Over the past decades, a simple and very effective technique has become very often used in sound recording – increasing the volume using compression, that is, reducing the difference between the loudest and quietest sounds. This method allows you to keep the listener’s attention longer, but makes the whole composition less expressive. Drum parts stand out less and timbre differences are smoothed out.

How did it happen? Of course, no one wanted to lower the quality of the music to dull the population. The reasons for the degradation are mainly market-based. The global devaluation has led to an increase in the cost of any projects, including in the media sector. Following the cost, risks also increased. Major labels spend a huge amount of man-hours and resources to create the most average product that will appeal to the vast majority of people, and they use proven methods over and over again. Hence the endless repetition, a decrease in depth and expressiveness. But this does not mean at all that all music is degrading. These are only commercial projects. Thanks to the Internet, the field of independent music has received a powerful breakthrough, which has allowed many talented musicians to show their work to millions of people – which was impossible for most of them 15 years ago.

So do not despair.

The Best Websites for Selling Instruments, Beats and Cons!