How to improve the quality of tracks on SoundCloud and YouTube? 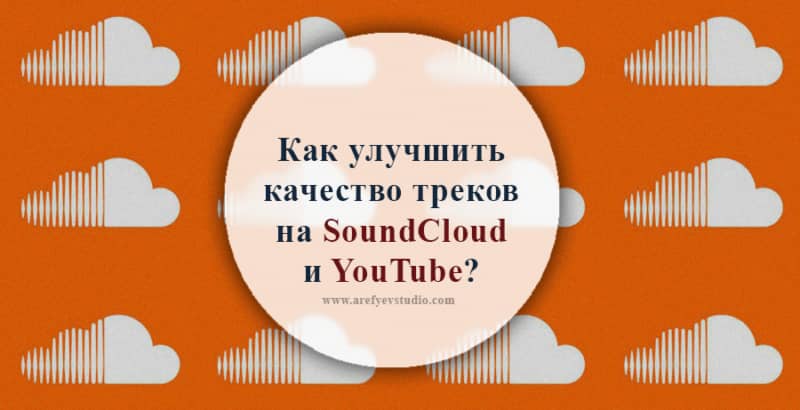 We often get questions about how to improve sound quality on streaming music services such as SoundCloud and YouTube. In this article, we will consider the main problem areas, and how to fix them. Applicable also applicable to Spotify, Apple Music, Tidal and any other streaming platform.

There are a few things to consider regarding music streaming:

Is there such a mix focused only on SoundCloud or YouTube?

Of course. There are studios that can perform mixing and mastering specifically for these platforms, but we adhere to the recommended practices, after which the material will sound professionally on any streaming and social platform.

The streaming formats used by SoundCloud, YouTube and other websites will be modified annually (due to the rapid development of the Internet and transmission speed). Therefore, focus only on high-quality mixing of your projects, and then make minimal changes to the sites, if necessary.

Improve the sound of your mixes in SoundCloud and Spotify

This tip applies to any music site. If you search online for keywords on SoundCloud sound quality, you will find many discussions where countless people express their disappointment about how the track goes bad after publication. We sincerely believe that this is not a mistake of this particular service. For each audio site, a relatively high level can be achieved.

At the time of this writing, SoundCloud will convert all materials to 128kbps Mp3 format for streaming. This is a significant lossy sound compression, which we wrote about in the article: Comparison of MP3 format frequencies.

To avoid distortion (or at least slightly reduce them), it is important to understand how conversion works. Without going into details, mp3 uses something called “perceptual coding” to compress sound. At a very high level, the algorithm analyzes your music and removes parts of it that it considers insignificant (for example, leaves the sounds of the first board and eliminates distant and quiet ones). All this is aimed at saving file size (wav 50 mb => mp3 9 mb). At 128 kbps, the encoder will remove anything above 16 kHz (many people cannot hear beyond this point) and will smear low frequencies.

Taking this into account, here are our recommendations for achieving the best sound quality when preparing mixes for publication on SoundCloud:

Mp3 at the center of the loudness war. It was developed in the early 1990s and was available for widespread use in 1995. Suzanne Vega’s song “Tom’s Diner” is considered “Mp3 Mother” because Karlheinz Brandenburg used this song to fine-tune its coding. “Tom’s Diner” was released in 1987, long before the so-called “volume wars” began, and also long before the home recording became popular and advanced. It is important to note that in those days mixes with very heavy dynamic compression, saturation and maximization, which we often hear today, were rare.

Everything we mentioned above also applies to YouTube and other streaming sites, but there are some additional comments that can be noted. There are two ways to control sound quality, but the key point to keep in mind is:

To achieve the best sound on YouTube, you need to provide a high definition video file (HD 720p, 1080p and higher). Receiving a high-quality format, he will encode it in the maximum allowable extension (at the time of writing, at 192 kbps). In contrast, if you choose to download a standard file (for example, SD 480p or less), you will get from 24 to 129 kbps, which will significantly affect the sound quality. Video hosting also recommends using a sampling rate of 48 kHz for the original video.

The second method of control is on the side of the viewer. After posting to YouTube, the person watching your video can get better sound quality using the high video extension. For example, if it plays your video on 720HD, it will sound better than 360SD.

How does volume normalization affect the sound of music in streaming services?

Several streaming services have implemented volume normalization. For example, Apple Music uses the Sound Check feature, which adjusts all songs to a preset gain level of -16LUFS. Spotify implemented its own normalization process, aligning everything to -11LUFS and using a limiter if necessary. Other sites have different goals, so there is no single “standard”.

Any processing that pinches your tracks – leads to its distortion. Mixing with wide dynamics will sound clearer and more musical than compressed mixes. Order professional mixing and mastering in our studio and get a new implementation of your composition!

What is Kontakt 5 and differences with Kontakt 5 PLAYER