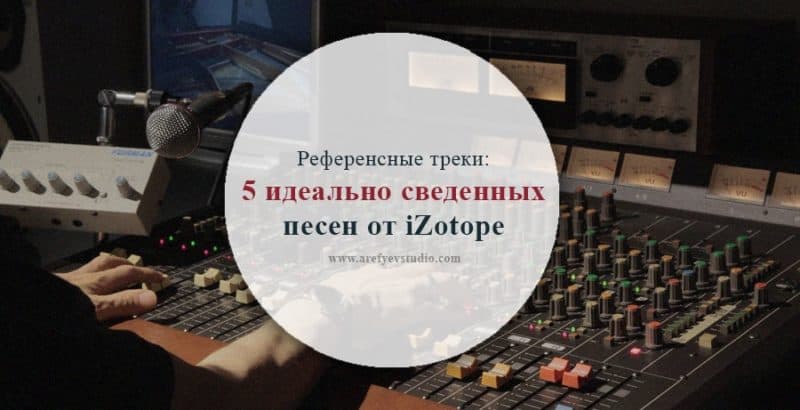 We have no doubt that people who work in iZotope are well versed in the practical and theoretical field of sound. Most recently, they put out their top best (in terms of mixing and mastering) songs. In some ways, we do not agree, somewhere, time and its harsh change in perception and top decisions affect our impression, but we cannot but share them with you. A few descriptions of the authors were added.

One of the groups that turned my eyes on Austin Psych Fest (famous festival-author). The group acted as an experimental disco duo. Their song “Rocket Number 9” has crazy live drums, saxophone and massive synthesizers.

Thanks to the whole production, the song has an excellent balance of instruments. It works like hypnosis. Each time, like a mantra, a new voice is added and it is very well written off into the general idea. Mixing has an ideal proportion. Here there is a deep buck, reverb, clarity of sound and the presence of the author in each note. The mixing was done by one of the greatest mixing engineers that the authors could only deal with. Despite the fact that everything was done by digital processing (even before it became popular). Sit back, time slows down and takes you straight to the scene!

3. “Gimme Shelter” by The Rolling Stones

We adore the engineers who worked on the Gimme Shelter composition because they did everything possible to get rich rock sound, richness and ideality during the Vietnam War. And tape saturation … continuous tape saturation! Recording such compositions today, many will be tempted to correct all the noises and effects that are rarely found in our time. But this is a good mix and mastering of the song of those times and deserves to be analyzed! Perhaps this song will inspire you.

4. “I Courted A Sailor” by Kate Rusby

We chose this composition to the top due to the fact that it has fantastically executed recording, idea, selection of instruments, mixing and mastering. The entire album (Little Lights), and especially this song, are exemplary of responsible work. Very light and pleasant vocals that I want to listen to! It is worth noting that the recording and implementation of the song took place at a time when the vocals were not corrected by tuning processing. Nowadays, this is important.

— See also: What is Kontakt 5 and differences with Kontakt 5 PLAYER —

5. “One Armed Bandit” by Jaga Jazzist

Jaga Jazzist presents an ensemble from Norway. Composer Lars Hornvet skillfully develops a musical theme using many layers and sound effects. Throughout the track, you will hear a large set of sounds that have their own space and textures. Given the number of instruments, it was difficult to combine them to get a clear sound. Six bass guitars playing in lower case … Undoubtedly, this work deserves attention and a high position in the ranking of the most purely mixed tracks!